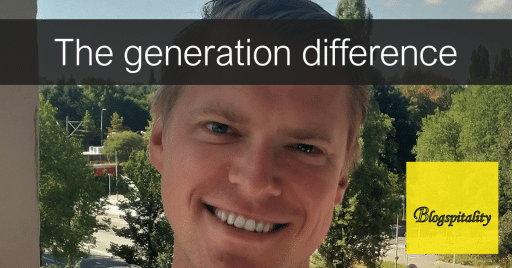 These days, especially in a city that has grown as fast as Amsterdam, the effort being put into the hospitality work-environment is drastically changing. Things like patience, value for money and the feeling of “satisfaction now” are being noticed by owners, managers, guests and customers but hardly by employees. There is a clear shift in the working generation.

I’ve recently experienced two different management styles to accommodate the growing changes in people’s reactions and cooperation. I’ve actually started noticing in myself that slight crave for a pat on the back, a high five or a “well done”. It could be seen by an older generation as babysitting, and I suppose in a sense, yeah, but that’s management. Professionally you could call it ‘guided nurturing’.

One of the two management styles I’ve experienced included the utilization of technology for time keeping, trainings and who did or didn’t pick up tips, for example. This was taken care of as easily as ticking a box on an app or moving your name to the ‘completed section’. (If you like to know, the app is called Trello).

I’ve always been trained to keep my phone out of sight during a shift, and I still stand by this. However, the manager chose a different route because; what’s the thing you do right before you walk into work or at the moment you leave? You check your phone! He tried to use the need for your phone to his advantage. We got rid of the paper work as everything, including rosters and recipes, are all on the app. The slight disadvantage to this method was, without relative strict supervision, that you couldn’t be sure why someone was on their phone during shift. The manager was in his early thirties but generally worked more in the background, he wasn’t so much on the work floor, not really hands-on during service, but, somehow, saw everything. This in turn let the managers, who’s age is closer to the rest of the staff, relate to them a bit more and manage them with more ease.

The latter have more experience, yes, but you can become quickly frustrated by the inexperience of the younger staff. That’s why we have things such as shift leaders and supervisors as a buffer between certain levels of staff.

Recently I’ve seen a lot of new articles about older Dutch bars shutting down due to lack of staff and changing times and trends. A bar is a living organism, like a person, the way it looks and feels influences the type of guests it attracts. It depends on the staff, the atmosphere and the venue itself. Bars to adapt to the changes that happen, whether it be in people, products or music.A typical Dutch brown café that has been there for 40 years can easily be there for another 40 years, but not if anything has changed in 40 years. I’m not telling you to stop serving “fluitjes” (a type of beer glass). I’m saying that if your surrounding changes you may need to change what kind of “fluitjes” you are serving.

The Generation now is… Now now.

I’m not going to be proud of this work example, but hey. Imagine the workplace is Facebook, the extra effort staff put in with customers is a ‘post’, then you can understand that they want people to like it. Acknowledgement. Whether it’s noticed at that moment or at the end of a shift with a debrief it’s a ‘like’. Look at however you want but it’s appreciation that’s sought after.

If your bar is failing and has been around for decade, take a second and understand why. I personally love getting a beer in a quiet brown bar, but there is also a treat vibe in a busy one?If you wouldn’t go there at a younger age, then why would a ‘young’ person work there? You may not be the man or woman you used to be, but neither is the way of life it used to be.