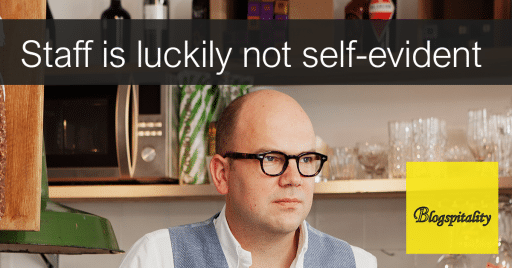 Obviously, this week’s papers are reporting about the staff shortage in the hospitality again. Nearly every guest noticed that in person this weekend in way too many establishments; long waiting times, no hospitable approach and clumsy types without any catering experience. If they even showed up. Too little staff was present, and it was like fighting a running battle. In the kitchens it’s not much better, but fortunately, the guests rarely experience and see that. On the Belgian shore restaurants even advertise with signs saying: “A real Chef works here!” Which actually makes them stand out, because in many places an amateur is warming up pre-packed dishes.

Hospitality is way too cheap

I have said it a couple of times already; in a place where people actually enjoy their job, which shows, and they take good care of the guests, it doesn’t matter if a beer costs two bits more. That is exactly when you have enough margin to make life a lot easier for everyone, just by including the service in your selling price, rather than giving it away ‘for free’. Plenty of restaurants and other hospitality establishments are just way too cheap! In a place where employees are valued, get healthy and good food during their breaks, who get paid when it’s been a little less busy, who love the place and the guests and are not changing jobs because of a tenner more.

In the AD (Dutch paper), Mr Robèr Willemsen (Chairman of the Royal Dutch Hospitality Association) claims to know the reason there’s a shortage in people, he points at others;

,,The issue is large, while the number of vacancies in the hospitality keeps increasing, with at least 15 per cent in the upcoming years. More and more businesses are focussing on daytime operation, since this demand has increased. This development is good, but in the meantime is our main competitor. Why would you as a chef want to work during evenings and weekends, if you could also work during the week from 9 to 5? And students, who used to be the target group, they barely have time left for a side job due to the large study load. Next to that, the competition of the retail industry, also stores are looking for staff.”

Of course, the things he mentions are causes for the shortage, but unfortunately, he disregards the responsibility of the entrepreneurs. It is absolutely not self-evident that people are dedicated to work for an employer. That is exactly where the problem is. Plenty of hospitality entrepreneurs think it should be an honour, perhaps even a part of nurture, a compliment, a gesture that they are so nice to offer someone a job. It is the other way around.
It is an honour that someone is willing to work for you! Because if something is currently NOT self-evident, it is the fact that people (would) like to work for you. This is ALWAYS something extremely valuable and as an employer you should treat this given ALWAYS very carefully. This fact is exactly the main concern that employers do not seem to be able to adopt to and the reason why it keeps occurring. It is something deeply rooted, just look at the average staff-meal in an establishment. Or at the outrageous overtime worked. It is not self-evident. People cannot persevere this! That is the reason annually 90.000 employees quit the hospitality industry, not because they take a job in retail.

Without your employees you are nowhere, that is clear now. Guests visit your establishment because of the nice people working there. And if there’s not enough of those nice people, guests will not spend enough! And there you are, as the owner of multiple places, mostly on the “wrong side of the bar”, the clock starts ticking, faster and faster. It is not self-evident to have enough staff. Never.

And to get back to the question of Robèr why you would want to work during evenings and weekends? Well, because that is the moment you are working the coolest job in the world, and most daytime hospitality doesn’t even come close! Oh, and by the way, with regards to those students, did you know that with TEMPER in two years’ time over 40.000 freelancers were added to the pile? Apparently, they did found the time.