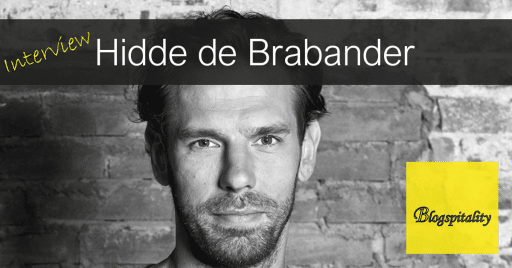 In this blogpost Hidde de Brabander elaborates on how he has created the masterpieces for his final examination to become Master Pastry Chef in 2018. We have a look within his mind, and see where he derives his inspiration from.

“Designing dishes is the hardest part of the culinary job. Most of the time you’re copying the creations of previous chefs. In the eyes of plenty of people that is a shame and something you absolutely cannot do. I think that discussion is more delicate.

Let me first say that I do not want to copy a complete dish or cake. That is something I don’t want to do… To me, one-by-one copying is a job we have machines for. Most of the times getting inspiration is still – in some way or another – copying a (small) detail from a previous creation. Sometimes it is a dish, but mostly elements and characteristics like shapes, perfumes or designs are the inspirational fundamentals. Getting your inspiration for a new dish is like making a puzzle with a thousand pieces; the main thing is focus. Focus on your inner self… Which is the hardest part, although everything is already inside of you.

You have to focus on your own thoughts…and that in a time where we mainly focus on the opinion of other people, an opinion that you will never be able to satisfy.
So please, give yourself a break and say on a regular base; F*ck you all!

If you don’t give a sh!t about likes, followers or other shapes of opinions of the people around you, you might think now that you are going to be unhappy. In fact, all those needs are making you unhappy. It’s a never-ending story. If you get rid of that stupid bubble of “love” you’ll find the one and only ‘like’ you need; the one from yourself.

Back to inspiration. It’s everywhere. Even in mathematical spirals…”

Inspiration from mathematics and music

Taking a passion to a next level requires motivation, focus and a lot of drive. Hidde de Brabander was the first man in eight years in The Netherlands to achieve the title of Master Pastry Chef. His unlimited creativity and knowledge have led to him being able to create a masterpiece resulting in passing his final examination. His admiration for music, one of the sources he derives his inspiration from, made him able to create what he has made. Based on the album “Lateralus” by Tool, Hidde has taken the Fibonacci sequence to a whole new level. What did he do?! The music of this song is written on a mathematical formula called the Fibonacci sequence, which has formed the foundation of Hidde’s inspiration. The Fibonacci sequence is as follows: 1+1=2, 1+2=3, 2+3=5, 3+5=8, 5+8=13 and so on.  The previous number is always the base for the next, resulting in an ever-increasing outward spiral. (If you would like to fully understand the Fibonacci sequence in the music, check this video.) Based on the numbers, Hidde chose certain amounts for the dishes he presented during his Master examination. The shape of the spiral is the leading and returning shape. Every decision was reasoned, and nothing was left to chance. Hidde has chosen the sequence since this is a metaphor for his career; the increasing numbers are affected by the numbers before, so every follow-up and every next step is arising from the previous one. Every single dish tells a story, which is exactly the reason this brilliant mind achieved his title.

To thank the people who contributed to the examination, Hidde hosted a 13-course dessert-inspired dinner which he called “Spiral Out”. The dishes are presented again inspired by the Fibonacci sequence. To take it even further: 13 is the seventh horde of the sequence, which Hidde has linked to the seven chakras of the Buddhism and their colours. These colours form the base for the courses of Spiral Out again. Hidde is a true artist with a passion for music, incorporating a balance between the crazy, creative part and the scientist within. To share some of his thought, Hidde elaborates on a few of his masterpieces below:

“The first dish I would like to explain is my Princess of Persia; my muse from the ancient Iran. The combination of flavours is based on a traditional Persian nougat; gaz. It’s made only with pistachios and flavoured with cardamom. I combined this with my true love for Riz au Lait. In this case, I made the Riz au Lait with basmati, the type of rice commonly used in Iran. When the rice is cooked there is always something left in the pan. In Iran they sometimes mix this with yogurt and ‘bake’ it, resulting in something called ‘tahdik’. I made crunchy tuilles of this and served the rice also in a puffed variety, with a gel of cardamom, rose petals and toasted pistachios.”

Next is indigo. The colouring for your jeans, but based on a root that can be found on Java, Indonesia. When the export of indigo was lucrative, coffee farmers were forced to grow indigo instead. This is where I made a link to coffee. I made a parfait of Javanese coffee, used in three variations; toasted, untoasted and from the outer skin of the coffee bean; cascara. The combination has also been found in a parfait, this time a milk chocolate one, made from Javanese cocoa beans. Last component was a sorbet of sour cherries, also with the outer skin of the coffee bean. The cake was glazed with an indigo colour. 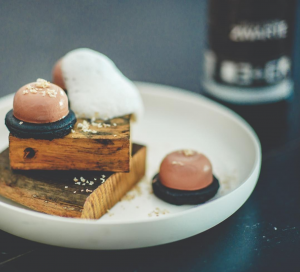 The third dish was inspired by Bourbon. A lovely drink, the base for many cocktails and we can go even further. First, I was experimenting with the used Bourbon barrels, which I used as smoke wood for the Big Green Egg. To smoke I use the heat of charcoal and one form of charcoal you can also use to colour your recipes. I made a meringue of it and the charcoal gives it, next to colour, also a typical texture. For the combination I found a very bitter chocolate, the Kumabo 80,1% cocoa from Callebaut. I made a namelaka with the chocolate and added a small amount of Bourbon. The namelaka was placed on top of the meringue, some grinded pecan nuts on top of it. The dish was finished with a milk foam which had been smoked on bourbon barrel wood. For the food/beverage pairing, I served a Smokey Stout beer that has been aged on Bourbon casks.”